Summer’s here, and the algae is in bloom 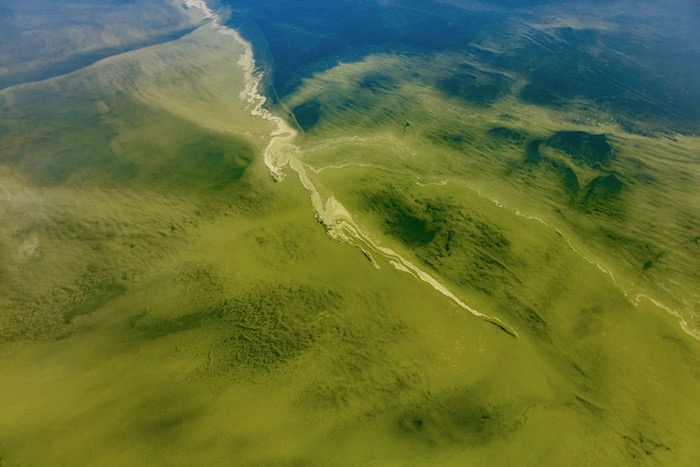 Blue-green algae, or cyanobacteria—the presence of which Lake Erie’s patrons dread with each coming summer—vary yearly in their toxicity, spread, concentration, and annual arrival time in the great lake. Thriving in slow-moving, warm waters, algae are typically described by their blooms: masses of pea-soup-like scum that coat the water’s surface.

More than an eyesore for lake visitors, these blooms can produce toxins that make humans and animals sick and have serious repercussions for Lake Erie industries like fishing and tourism. A dangerous bloom in 2014 released an algae-produced toxin called microcystin that contaminated the drinking water of 500,000 people in Toledo, Ohio.

As such, annual algae forecasts are an important tool for resource managers, the tourism industry, recreational users of the lake, and commercial fishers to prepare for upcoming conditions.

On July 11, the National Oceanic and Atmospheric Administration (NOAA) delivered 2019’s harmful algal blooms (HABs) forecast, anticipating a significant bloom event measuring 7.5 on the severity index (with upper and lower limits of 6 and 9, respectively). Several harmful algal blooms have already been detected on the lake, including a 'giant' bloom that was discovered this past weekend.

Forecast Explained by Heavy Rains and a Poor Farming Year

2019 has been an extremely wet and poor year, with many saying this is one of the wettest springs they’ve ever experienced. The heavy rains had researchers originally anticipating an even more severe bloom.

“Due to the amount of rain this year, farmers were unable to plant their fields, which reduced the nutrient concentration,” Richard Stumpf, Ph.D., NOAA’s National Centers for Coastal Ocean Science’s lead scientist for the seasonal Lake Erie bloom forecast, explained. “If we had the expected bioavailable phosphorus, we would be near the potential record bloom for this year.”

NOAA is continuing to work with its academic partners on refining and improving the models used to develop forecasts, after being fairly surprised by this year’s results.

“[Reduced nutrient concentrations from the poor farming year] combined with higher than normal lake levels presents an opportunity to test the accuracy of our models,” Stumpf said.

NOAA reminds lake goers that the bloom is not everywhere in the lake, and that the patch moves based on wind patterns. You can track the weekly location of the bloom using the NOAA HABs bulletin.

The Freshwater Alliance has been working to prompt stronger action to reduce algae-causing nutrient pollution. Write a letter to your elected officials to ask that they take action now!