Not all monsters live under our beds or star in horror movies. You can find some real-life monsters right here in Canada's waterways. Some appear terrifying at first glance, with beady eyes and mouths lined with sharp teeth, while others weigh hundreds of kilograms. And then, there are the invasive monsters, steadily overtaking our lakes and rivers. Scary!

So, with Halloween nearly upon us, here's some information about four different monster freshwater creatures.

While they're the smallest of the seven species of gar found in North America, don't let that lull you into a false sense of security. With their long, streamlined body and beak-like mouth packed with sharp teeth, these fish are excellent at catching fast-moving prey.

Good management practices and habitat conservation are vital. Since the Spotted Gar was listed as endangered on the Species at Risk in Ontario (SARO) List in June 2016, many recovery plans are being put in place to protect the species, including protecting their critical habitats, identifying and removing threats and educating local landowners and communities about the species.

Usually solitary and highly territorial, the Northern Pike lurks at the edge of weed beds and attacks unwary creatures that enter its domain, such as fish, crayfish, frogs, mice, muskrats and young waterfowl. It is an opportunist that can be best described as an omnivorous carnivore, as it feeds on whatever is most readily available.

Northern Pike are common throughout Quebec, Ontario, the Prairie provinces and northern territories, and native to northeast BC. However, they are being introduced in many regions as stock for sport fishing and are spreading into southern BC, where they have been known to deplete prey species from waterways, pushing out local large fish and collapsing food webs.

Because of their prolific and predatory nature, many have enacted laws to help stop the spread of northern pike outside of their native range, including making it illegal to release life fish or fish eggs into freshwater sources without a special permit. 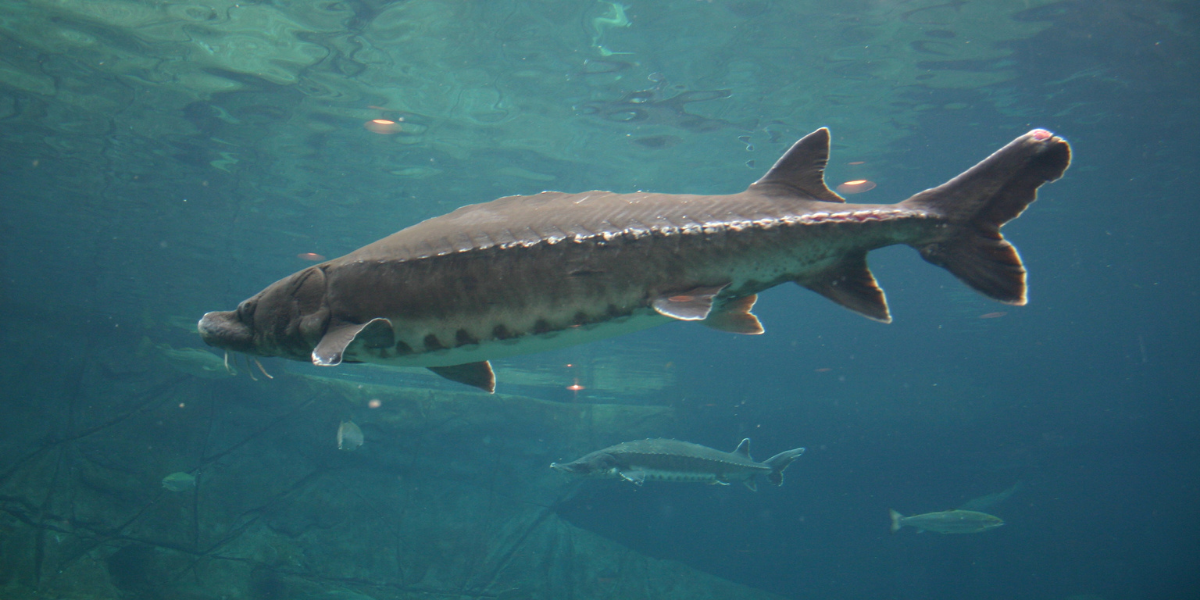 You'll find this living dinosaur lurking in the dark depths of big rivers, where they have remained relatively unchanged for millions of years. White Sturgeon can reach up to 6 metres in length and weigh up to 635 kilograms. Instead of scales, they have sharp, bony plates called scutes, along with a shark-like tail, catfish whiskers and a toothless, vacuum-like mouth capable of inhaling its food whole.

Over the past century, White Sturgeon populations throughout their range have been adversely affected by over-fishing, construction of hydroelectric dams, dyking and drainage projects, and human competition for food such as salmon and eulachon. Their future is also threatened by declining water quality as human populations increase and land uses intensify in the Sacramento, Columbia, and Fraser river basins, the main watersheds where White Sturgeon live.

Today, the plight of the White Sturgeon is widely recognized and the species is getting increasing attention. Many groups are working to prevent the watershed the sturgeon live in from deteriorating further, while others are leading conservation efforts through tracking, monitoring and assessment programs, along with public education and outreach. Additionally, all sturgeon angling in BC is catch and release only, and anglers must take special care to treat fish gently during the process.

The term Asian carp collectively refers to a group of four species of carps: bighead, black, grass and silver. The biggest threat comes from the Silver Carp. They have broad heads, toothless upturned lower jaws, and can be found together in large numbers. These fast-swimming invasive fish can grow as large as 40 kilograms and leap three metres or more when startled. They can pose a danger to anglers and boaters when they fly out of the water at high speeds.

Asian carp are a highly invasive species that will out-compete other fish for food and space, hurting native aquatic animal populations. They are voracious eaters, able to consume up to 20 percent of their body weight each day, leaving far less of the microscopic plant and animal life native fish need to survive. Even scarier, Silver Carp are prolific breeders, and can lay up to 5 million eggs per year!

The search for evidence of Asian carps comprises a major part of Fisheries and Oceans Canada’s efforts to combat this invasive species. In addition to traditional electrofishing and new sampling techniques, U.S. and Canadian researchers are currently exploring the results of environmental DNA testing for its use in Asian carp surveillance. In Canadian waters, biologists from the Ontario Ministry of Natural Resources and Forestry and Fisheries and Oceans Canada work closely together to collect information and share findings.

Want to stay up to date with more seasonal freshwater facts and news? Sign up for our newsletter and we'll deliver a curated newsletter with our latest news and updates once a month.