Of Aquifers and Uncertainty: Sustainable Water Use in Twin Lakes, BC

Tucked within the mountains of the southern Okanagan basin sit a pair of small upland lakes, called the Twin Lakes. Two small mountain streams, Bear Creek and Horn Creek, supply the lakes with their source water. These snowfed streams wind their way down to the lakes through a deep gully that they have carved out in the surrounding volcanic bedrock over millennia.

I went to see Twin Lakes for myself a few weeks ago, with local Carol Brown as my guide. She greets me with eager enthusiasm when I arrive, a little later than expected. “We only have another couple hours of daylight, so we better get going,” she exclaims.

Although Carol is a retired physiotherapist, retirement certainly has not slowed her down. She is a board member of Lower Nipit Improvement District, a group of local volunteers that have banded together to regulate water levels in the Twin Lakes--which is prone to both drought and flooding. She is also a member of the not-for-profit Greater Twin Lakes Area Stewardship Society.

The Society has raised concerns about a local development proposal that is under review. The proposed development would build 208 new dwellings on a golf course located just a few hundred metres away from the lakes. The development, if approved, would more than double the number of households in the community. The new units would draw water from the aquifer that sits below the lakes and golf course. The aquifer has been characterized as both small and at capacity, according to a 2011 consultant’s report. The developer, therefore, has requested a water variance in order to reduce the amount of water required per residence for the development to be approved.

I grab a coat for myself and my partner who has come along for the journey, which Carol affirms is a good idea. “Dress warm,” she says. “It gets quite cool in the upper watershed!”

She introduces us to her friend Herb, whom she has recruited to drive us in his 4x4 to the uplands. All four of us pile in, and we start the journey upwards.

It’s late May, and I’ve come from Kelowna in the Central Okanagan. Although the valley bottom is warm and balmy, the temperature plummets as we ascend. The cold on my cheeks is both refreshing and jarring. I’m a little dizzy as I take in the chilly, forest air.

Our first stop is at a culvert under an old logging road that has been entirely washed out by freshet flowing into Bear Creek. There was active logging in this area for a long time, but this road is in the process of being decommissioned. A little while later, we make another stop, this time at a cedar tree that she guesses is at least a couple hundred years old.

Carol wants me to see the upper watershed so I can experience the place she calls home. She is a fountain of knowledge about Twin Lakes, and has explained an awful lot about the history and science of the watershed to me in the weeks prior to my visit. Although I could mostly piece together the information, words don’t quite paint the same picture as being there.

In this little oasis, it’s hard to grasp how the water supply could be threatened by a development. At this time of year, the water that runs down from melting snow on high is in abundance. It seems like there is more than enough to go around. But looks can be deceiving.

The aquifer beneath the Twin Lakes Area is alluvial. Alluvial aquifers are composed of coarse materials like gravel and sand. This means that they tend to be easily permeable. Alluvial aquifers have the ability to store water but, unlike aquifers confined in bedrock, can be elusive when it comes to estimating discharge and recharge rates. 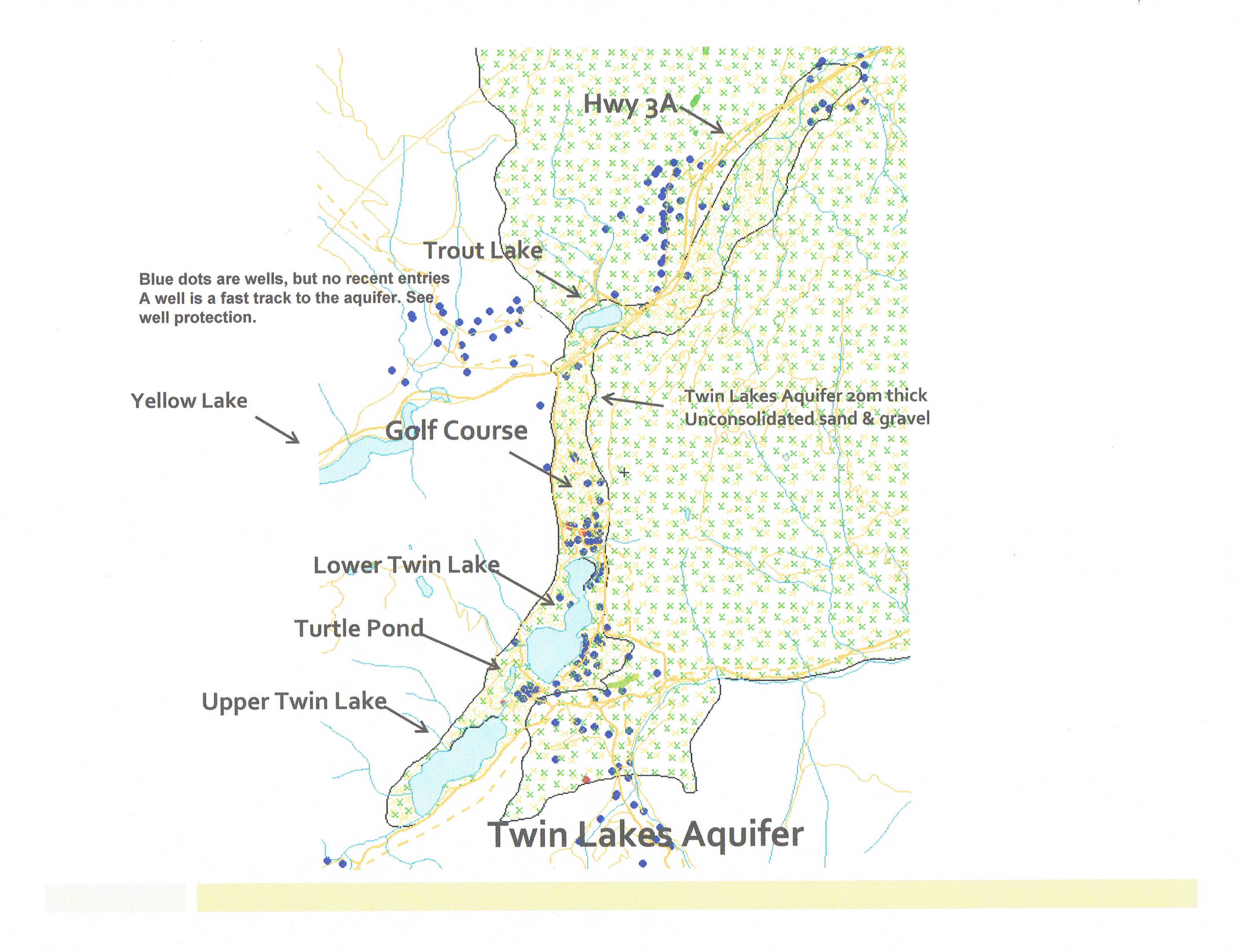 The water that charges the Twin Lakes aquifer comes predominantly from snowmelt in the uplands. In the springtime, water flows quickly down Bear and Horn Creeks, to the lakes, and percolates into the ground.The volume of water contained there depends on factors like the thickness of the mountain snow pillow, the rate of snowmelt, and the integrity of the streams that transport the water. All of these factors can vary dramatically between years.

Only a fraction of all that water that flows down the gully in the springtime actually permeates into the ground. And it doesn’t stay indefinitely. Like surface water, groundwater flows too. The water from the aquifer continues on its journey downhill, eventually making its way to Skaha Lake, one of six fjord lakes at the bottom of the Okanagan Valley.

What’s more, water from snowmelt in the spring is usually plentiful but by mid-summer and fall, it is not uncommon for the creeks to run nearly dry. The volume of water in the aquifer, then, is also determined by seasonal hydrology.

The 2011 hydrogeologist report warned that the aquifer is already “near or at its sustainable limit.” Extensive field studies are needed to know just how taxed the aquifer is. So when Carol and the Greater Twin Lakes Area Stewardship Society caught wind of the proposal for 200 new dwellings that would draw from the aquifer, they were concerned.

The Society has been seeking to proactively address water supply uncertainty in the Twin Lakes Area by trying to raise funds for a watershed management plan. With a plan, they would have the capacity and resources to do the necessary science to make sure the right decisions are being made.

BC’s new Water Sustainability Act has a provision that enables the creation of community-based sustainability plans, but the regulation that allows for the resourcing and delegation of authority of such plans is still at least a year away. The Regional District of Okanagan-Similkameen, however, is due to make a decision about the water variance proposal in early July.

“We’re not anti-development!” Carol reminds me, several times throughout our tour. She recognizes that tourism and development bring economic and social benefits to the community. But she is concerned that the development could be approved without a fulsome understanding of the hydrology of the aquifer. The Twin Lakes Area doesn’t have another water source, so overallocation of water could have rippling repercussions for the whole community.

In the meantime, Carol and her peers are doing all they can to encourage precaution in the management of their community’s water. And who can blame them? The Twin Lakes watershed is a pretty special place.