Witnessing a historic moment: Wet'suwet'en laws in action on the land

It’s a frigid day in Smithers as I join the large crowd gathered in a snowy Bovill Square. We are here to witness and to listen to Wet’suwet’en hereditary chiefs and supporters.

Collectively, they tell a story of stewardship, sovereignty and justice. A story that asks us to interrogate recent events and their bearing on reconciliation, the United Nations Declaration on the Rights of Indigenous Peoples, and the future of our grandchildren’s children. A story that involves us all, and boldly declares #thetimeisnow.

International Day of Action in Solidarity with the Wet’suwet’en

Scores of people gathered in public squares across Canada and around the globe on January 8, 2019 to support the Wet’suwet’en Nation, just hours after 14 people were arrested for erecting an access checkpoint in protest of the scheduled construction of the Coastal GasLink pipeline on unceded Wet’suwet’en territory.

The 670-kilometre pipeline project is part of LNG Canada’s initiative to transport fracked gas from Northeastern B.C. to a proposed export terminal in the coastal town of Kitimat. Acting on a court-issued injunction order, the RCMP scaled and dismantled the checkpoint in the twilight hours of January 7, clearing a path for construction and forcibly removing and arresting the land defenders who refused to step aside.

The International Day of Action in Solidarity with the Wet’suwet’en brought Indigenous and non-Indigenous people together to voice solidarity with the Wet’suwet’en Nation. The Nation’s five clans have unanimously opposed all proposed pipelines through their traditional, unceded territories, and supported the action taken to create the access checkpoint. 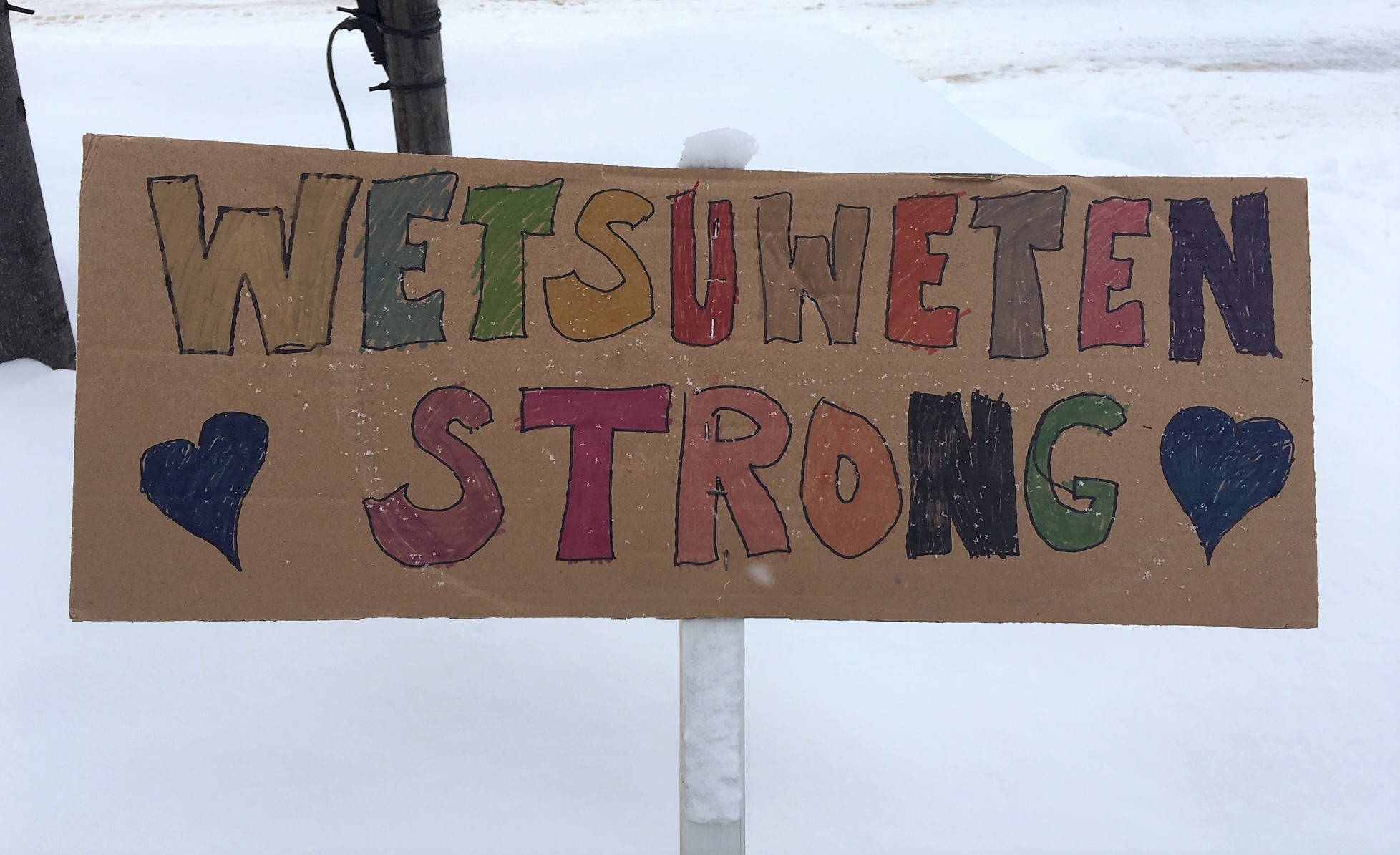 The Wet’sutwet’en Access Point on Gitdum’ten territory (one of the five clans) was set up along a forest service road that travels over the Wedzin Kwa. In the Wet’suwet’en language, Wedzin Kwa means blue-green river or clear, flowing waters, and refers to the Morice River and the Bulkley River, which join together near Houston, BC.

Wedzin Kwa is a pristine and healthy water system in the heart of Wet'suwet'en territory. It joins the Skeena, the second longest river in British Columbia, and snakes its way from the canyons of Hazelton in Northwestern BC out to the Pacific Ocean at Prince Rupert. The Morice-Bulkley and Skeena watersheds have sustained the Wet’suwet’en people and their way of life for time immemorial, and continue to support a wealth of fish, wildlife and vegetation that draw residents and visitors to the region.

“Our people’s belief is that we are part of the land. The land is not separate from us. The land sustains us. And if we don’t take care of her, she won’t be able to sustain us, and we as a generation of people will die.” – Freda Huson, Unist’ot’en Hereditary Spokesperson

The Gitdum’ten access point supports and fortifies the established Unist’ot’en Camp (another of the five clans) built to stand in the way of what companies like Enbridge and Chevron have proposed as an “energy corridor” through Wet’suwet’en territory. Together, the checkpoints are not only an act of resistance but also a celebration of Wet’suwet’en culture that draws sustenance, healing and strength from the land - the ability to forage, hunt, gather medicines and drink clean, life-giving water.

Wet’suwet’en territory, a vast 22,000 square kilometre area of lands, lakes and rivers, has long been stewarded through a traditional hereditary governance system. Different from elected band councils whose decision-making authority is limited to reserves, a matrilineal system of hereditary chiefs is the basis of governance on unceded Wet’suwet’en lands, a system that predates colonization and the founding of Canada.

The Wet’suwet’en recognize the value of their territory, which was recognized as unceded by Canadian courts in the landmark Delgamuukw case, and do not want to see a precedent set for unsustainable natural resource extraction.

The Canadian federal and BC provincial governments have committed to uphold the United Nations Declaration on the Rights of Indigenous Peoples (UNDRIP), which sets out the standard of obtaining Free, Prior and Informed Consent (FPIC) prior to approving any project that affects Indigenous lands, territories or other resources.

Wet’suwet’en hereditary chiefs had not provided this consent to Coastal GasLink or Trans Canada to trespass and begin construction of pipelines on unceded Wet’suwet’en lands. Instead, they supported the access checkpoint as a peaceful enforcement of consent protocol for resource extraction and construction in their territory.

Reconciliation is not a nice idea, it is a verb; and it is only as good as the actions we take. It’s also about claiming the responsibility we all have towards the water and lands that sustain us and all life on earth.

Climate change has made that two-way relationship even more striking, with many First Nations leaders at the frontlines of taking actions to combat its effects, from abstaining from salmon harvests to opposing pipeline proposals. The world is now watching, to see how Canadian institutions will respond, and what kind of leaders they will be.

Before dispersing from the square, voices of all ages chant in unison: What do we want? “Consent!” When do we want it? “Now!”  Today, the square still echoes with declarations staked in the snow, offering solidarity, thanks and admiration for the Wet’suwet’en who are protecting water, salmon and land for our collective future.